On 18th and 19th March 2013, in the Southeast Asia Regional Conference â€œWomen Fight Corruptionâ€, 95 representatives of civil society and governments from Indonesia, India, Cambodia, Timor Leste, Vietnam, Laos, Malaysia, Philipines, came together to commemorate the International Womenâ€™s Day which falls on the 8th of March 2013.Â  The objective of the conference was to increase awareness as well as to strengthen stakeholder commitment on the issues of womenâ€™s movements fight against corruption.Â  The conference was organized in recognition of the fact that corruption has a gender dimension, whereby women â€“ specifically impoverished women and children – bear a greater burden of the impact of corruption.Â  Corruption is a daily experience, especially for women from grassroots communities, majority of whom are victims of corruption.Â  Studies conducted in several countries and the experience of civil society organizations and grassroots women show that there is a relationship between the level of corruption and gender equality.Â Â  Low levels of corruption are associated with greater gender equality.Â  So, strengthening the womenâ€™s movement in the fight against corruption can provide a breakthrough in the efforts towards eradication of corruption.

Â To strengthen the womenâ€™s movement against corruption, we have developed an Action Plan and Womenâ€™s Resolution to fight corruption to become recommendations for the anticorruption movement of each country, namely:

The action plan and the womenâ€™s resolution in the fight against corruption is conducted in accordance with the policies, rules and regulations applicable in each country.

The action plan together with the resolution will be discussed further in the upcoming UNâ€™s high-level panel (HLP) in Bali that will discuss the development framework after MDG is completed in 2015.

It is assessed that the action and resolution should be carried out in fighting corruption.Â  Corruption is a serious matter, not only for Indonesian but also for other countries, particularly the countries in Southeast Asia.Â  Corruption is an extraordinary crime which is systemic and rooted in the political system dominated by the elites, committed collectively by public officials in the executive â€“ legislative â€“ judicative , corporation and also public actors, and therefore it is a denial to civilization.

Political system is dominated by the elites who maintain economical, political, oligarchic power designing the individuals to commit corruption, weakening supervision and marginalizing the poor people even more.Â  Corruption is the enemy for the efforts in eliminating poverty, implementation of human rights and state administration based on good governance principles, namely transparency, democracy, accountability and creating social justice.

Corruption eradication is the responsibility of each individual in the society, government and corporation.Â  We hope that the action plan and resolution will be a joint working agenda of civil society, government (legislative, executive, judicative) and corporation for the sake of rebuilding the civilization denied by corruption practices and the permissive views and stance against corruption due to various reasons.

Supporters of Action Plan and Resolution 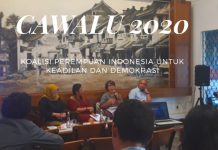